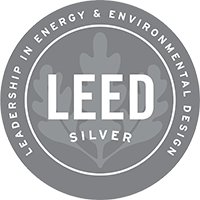 The existing building, Johnson Hall, was built in 1912 and is a registered historic building on the Occidental campus. Situated along the quad, the leading student thoroughfare through campus added difficulty to the construction process. The scope of work within the existing lecture hall included a near-complete interior demolition. Features not demolished—stairs and rails, structural components, and wood features—were preserved, renovated, and incorporated into the existing finishes.

The ceiling of the entry lobby was removed to create an open entry where a media wall was constructed, an immediate focal point upon entering the building. The renovated lobby is considered the technological nexus of the entire building – with an invention described as a digital post-it wall. It’s a gently folded plane of slumped glass panels, subtly textured, sandwiching a layer of vinyl printed graphic patterns, backlit, with eight video monitors mounted behind the glass on which students can post their digital content.

The four-level building houses administrative functions on the first, second, and third levels, with classrooms and professor offices on the fourth. Also housed on the second level is a newly oriented two-level auditorium incorporating custom acoustic wall treatments and historic wood components.

Although this project utilized the classic design-bid-build model, the complexity of the renovation coupled with the difficulties of working within an existing historic building and circa 1912 structure, success could not be achieved without the collaborative efforts of all team members. This multi-phased project to one of UCR’s oldest buildings, Pierce Hall, was a complete building renovation with the addition of new classrooms.…

Bringing new life to an outdated school campus, Valley Middle School in Carlsbad received a much-needed modernization. The work touched on both interior…

With a focus on STEM majors, the new LEED Silver Swenson Science Center is located at the heart of California Lutheran Universities’ main campus in…